Disputation: Capturing Air Pollutants: Photochemical Adsorption and Degradation of SO2, NO2 and CO2 on Titanium Dioxide

Lägg till i din kalender

Abstract:
Titanium dioxide (TiO2) is a material with many useful properties. It is used most widely as a pigment in white paint, although in technological research it is better known for its ability to catalyze chemical reactions during light absorption. This process is referred to as photocatalysis, where the energy of the light is used to power the chemical reactions. This has enabled several interesting applications of TiO2, where it can for instance be applied to windows or façade walls to make their surfaces self-cleaning. Another implementation that has received much attention lately is artificial photosynthesis, where the light energy is used to transform CO2 and H2O into synthetic fuels. This thesis work contributes to the development of both these applications, although the main ambition is to show how three of the most common ambient air pollutant molecules, SO2, NO2 and CO2, can be captured at the surface of TiO2 by means of photocatalysis.

Specifically, infrared (IR) spectroscopy and density functional theory (DFT) has been used as complementary tools of analysis to study the photocatalytic reactions that enable transformation of SO2, NO2 and CO2 into strongly bound sulfates, nitrates and carbonates, respectively. This combined experimental and theoretical approach has enabled a detailed description of how these reactions proceed and has further shown how the fundamental reactivity of the TiO2 surface changes upon light absorption.

The work presented herein contributes to an increased understanding of photocatalysis and shows, quite generally, how molecules can be effectively captured at the surface of metal oxides by forming surface-integrated ionic adsorbates. 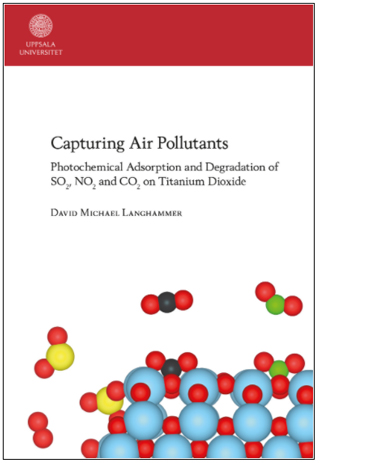